How long has artificial grass been around?

Synthetic grass was first manufactured in the 1960’s by Chemstrand Company, who went onto become Monsanto Textiles. It was the Ford Foundation that first set about using it as an all year round sports playing surface in their mission to bring developing urban spaces for children. In 1964 the first artificial grass surface was installed in Moses Brown School in Providence, Rhode Island. It was called Chemgrass back then, but later changed to Astroturf. By 1966 artificial grass had hit the big leagues (literally) as the Astrodome opened in Houston to host major league baseball games. 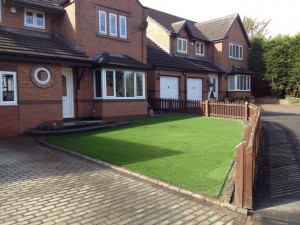 What’s the difference between astroturf and modern artificial grass?

Well there is no difference really. Astroturf was originally the brand name of synthetic turf but was adopted as a “genrecised trademark”, much like hoover, biro, band-aid and – believe it or not – ping pong. Nowadays it is often used as a verb (to astroturf your garden).

How is artificial grass made?

The tufting process, which is fundamental in the creation of artificial grass (and indeed carpets) was created in the early 1950’s. The process first involves creating a yarn by mixing the raw ingredients together in a hopper and adding dyes and chemicals to make the mix green and protect it from elements such as the sun’s rays. Once stretched into ropes, these large nylon yarns are wound onto spools and then heated to create the twisted shape. The tufting process involves feeding the yarn into a tufting machine in which several hundred needles feed it into a primary backing material and pushing it into a loop. This process is repeated several hundred stitches per minute, creating a carpet of synthetic turf.

How much maintenance does artificial grass require?

Well compared to natural grass lawns, not much at all really. In fact it’s the low maintenance aspect of synthetic grass that is what appeals to so many people who simply don’t have the time to tend to a real grass lawn, or whose grass lawn doesn’t catch any sunshine. Artificial grass needs to be kept clean and so brushing dead leaves and moss off it is required occasionally, especially in the autumn. From time to time it may need a quick hose down, but you can put the lawnmower on eBay as you won’t be needing that anymore. Good drainage is essential as water can build up on synthetic grass lawns.

How long does artificial grass last? 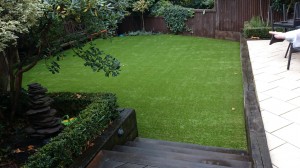 Most artificial grass companies (including Easigrass) will guarantee your synthetic lawn from fading for ten years but most modern artificial grass lasts will last a lot longer than that, often up to twenty years if it’s been looked after.

Just how popular is artificial grass these days?

At Easigrass we’ve seen sales increase 40% year on year since we began trading in 2006 and that includes through the recession. This goes for our international partners as well. With similar figures reported across the sector, it seems that artificial grass goes from strength to strength in terms of popularity. This can be explained by an increase in busy lifestyles, where people have very little time to maintain and look after a real grass lawn. More than that is the fact that synthetic grass is finally starting to shake the image of it as a brittle, uncomfortable and unrealistic looking alternative. With more and more people seeing for the first time the incredible realism and realistic feel of artificial grass, at Easigrass we believe its popularity will only continue to grow in the coming years.

About the Author: Anthony Gallagher is the Managing Director of the Easigrass Group, a network of award winning artificial grass franchisees and International Licensed partners. Under his stewardship, Easigrass became the first artificial grass company in the world to exhibit a show garden at the Chelsea Flower Show in 2010. You can connect with them on Twitter, Facebook or find out more by visiting their YouTube channel.

What are the tips for a autumn garden lawn?

How to fix an external wooden door

Building Your Own BBQ Area: A Guide

Three Ways to Spruce Up Your Backyard

How To Create A Play Area in The...

Design Your Garden in Traditional or Modern Style

How to install a hot tub in your...

DIY Guide about How to Make an Indoor...

What Are The Benefits Of Having A Paved...

Common Lawnmower Problems and How to Fix Them

How to Make Your Professional Gardening Tools Last...

Ways you can benefit from gardening

Building Your Own BBQ Area: A...

Three Ways to Spruce Up Your...

How To Create A Play Area...

Design Your Garden in Traditional or...